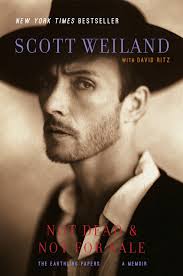 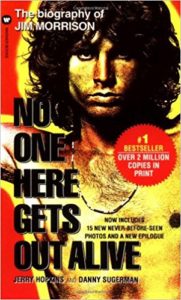 No lack of substance here (literally). True, some readers, reviewers and fans might be disappointed by the terse, tenuous and to-the-point chapters of Scott Weiland’s autobiography. However, I found his memoir insightful and edifying. I think he was wise to say just enough and the rest can be gleaned from his lyrics and his vast contribution to music, which is most important.

Originally published in 2011, this bio is fast paced like the author’s tempestuous lifestyle and supports the fact that some of our most gifted artists are often our most troubled (see also my review on Andy Warhol Was a Hoarder). It is sometimes a mixed-blessing, curse or nature of the beast. Like the poet Rainer Maria Rilke once said: “If my devils are to leave me, I am afraid my angels will take flight as well.”

Akin to Jim Morrison’s biography “No One Here Gets Out Alive” (NOHGOA), “Not Dead And Not For Sale” (NDANFS) follows a similar trajectory and classic Three Act Tragedy as we watch The Bow Drawn, The Arrow Flies, The Arrow Falls.

Scott Wieland was a self-professed chameleon. He was immensely talented, intelligent, instinctive and most of all deeply sensitive. You can see his influence and “stamp” in all projects ranging from STP, Velvet Revolver and The Wildabouts. He was also a colossal loss, and his lifestyle serves as a cautionary tale.

In the final analysis Rock and Roll, at its best, is a circus show of a business, as dangerous as it entertaining. Scott Wieland took it to the brink as he once wrote in “You Got No Right:”

Addiction is one hell of a demon to slay, and it took a lot of guts to share personal issues of abuse and personal struggles and his bipolar disorder. It is a constant source of frustration, disappointment and devastation to those close to the addict, especially true friends and band mates. He got up close and personal with the hard stuff. Jim Morrison, as it was often reported, steered clear of heroin and that substance might have eventually killed him in Paris, albeit accidental or speculative.

Unlike NOHGOA, there is no mystery with Scott Weiland’s death and how the Arrow Falls, the hero and author of this tragedy dies on a December 3, 2015, to the world’s shock and sadness. He outlived Mr. MoJo Risin’ by 21 years (July 3, 1971).

Unfortunately, the dragon or demon known as addiction won in the end with Scott Weiland. He leaves us with great insight and three decades of music to enjoy, resonating and/or relating without having to experience the pain ourselves.

Stone Temple Pilots hit the road again this year in 2018 with a new album, new singer and  new fans, but…

As Jim Morrison once wrote: “There Will Never Be Another One Like You…”

That applies to both Morrison and Weiland.