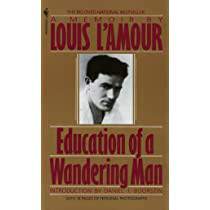 The first book I ever read by Louis L’Amour was “Hondo.” I subsequently read “Mustang Man” and then “The Quick and the Dead,” and then I had to collect, invest in and read them.  I purchased them all online with the original covers and western pulp artwork. Prior to L’Amour I had read Elmore Leonard’s western books on the old west. I grew up on the cinema of John Wayne/John Ford and Eastwood/Sergio Leone Spaghetti Westerns.  The genre stuck with me and I still revisit them to this day.

I wanted to delve deeper into L’Amour, the man and the writer, and came across his memoir “Education of a Wandering Man” and couldn’t put the book down.  Here are the lessons I learned from him: