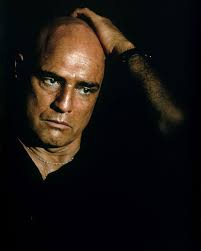 The Day Brando Died (Ode to the Apocalyptic Godfather)

I wanted to help him out as a poet

when I once worked for a place called Borders —

Will anyone remember Borders?

I met up with Madsen in Woodland Hills in the Valley.

A girl named ‘Honey” was the hook-up.

She knew and introduced

for celebrity and poetry interviews.

This was the day Brando died,

Remembering Brando in The Fugitive Kind,

Stanley in A Streetcar Named Desire,

Terry Malloy in On the Waterfront,

and The Wild One.

On this day, even Bukowski would certainly agree:

— Especially a day like this day when Brando died,

Yes, “even the sidewalks, children,

But oddly enough, I seem to reflect on two

things most about Brando:

for the mistreatment and portrayal of

politicizing the Oscars in perpetuity.

2)  When he refused to swear on a bible during

Brando claimed he failed as a father. Christian did time. Cheyenne hung herself…

Meanwhile, back in the control room, watching behind with the network,

Madsen was about to go live over The air, Middle-East and everywhere,

I sat back with the producers. They wanted to use the now overused

torture scene with the cop.

I asked them not to on this day that Brando died.

and barbaric images of beheadings

of Americans in Iraq were daily news.

We were there in Woodland Hills to celebrate poetry after all,

and the poetry of life should be the reason any of us are here.

Hollywood plays and pretends and portrays to that end.

But the terrorists play for keeps and

everything you once loved.

No acting. Just psychopathic casting in a film

and can’t refund the ticket.

I imagine might probably ask, “Where is God in all this

moment of agony or certainly…

He certainly would not swear on anything

but his children and grandchildren.

now that he is gone

Was he all wrong?

What was he rebelling against?

“What do you got?” His cinematic ghost whispers back.

Famous for once acting in Hollywood

where a pretend prop severed head of a prized thoroughbred,

left in the bed of on enemy —

A brutal and barbaric reality we now face,

“Keep your friends close and your enemies closer.”

Cut To: A different scene in time.

No, I told the producers. Let’s use another scene.

The one where Mr. Blonde meets Nice Guy Eddie

in the office of Big Joe,

Then we will talk poetry and celebrity on this special day,

as I watch from behind in these

© 2022 Michael P. Naughton from the forthcoming poetry book, The Shores of Madrid