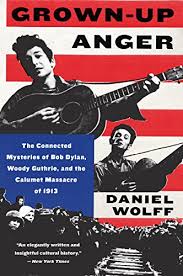 They say: “Where there’s smoke, there’s fire.” Meaning there is a good foundation to the suspicion of a situation. Woody Guthrie sang about the atrocity of the 1913 Massacre, also known the Italian Hall Disaster, a festive occasion with town miners of Calumet Michigan and their families which turned to tragedy. 73 people died senselessly – 59 innocent children perished on Christmas Eve, a time that should have been joyous and magical — awaiting Santa to bring them gifts — instead they were trampled under foot and stampeded. All over some practical joke. Someone falsely yelling “Fire!”

This book “Grown-up Anger” produces a lot of smoke to back up the “fire” and the greed of the bosses that ran the mining company. Other books have been written on the subject, but I suspect Grown-Up Anger will be a classic over time. What’s disturbing about this story is, like many times in our society, we have a swift and sloppy investigation and no resolve, just more questions and ultimately the big burning question: Why did this happen?

It has been 104 years since this tragedy and author Daniel Wolff weaves an engaging triangle of anger.

The chain of inspiration, or connection, is simple. Daniel Wolff was inspired by Bob Dylan. Dylan inspired by Woody Guthrie. Anger links the three and results in a fantastic and engaging new book “Grown-Up Anger.” Wolff’s book is rightly named “Grown-Up Anger” and you will be incensed too after you learn more about the 1913 Massacre. This book is informative and weaves politics, socialism, communism, rich, poor, haves and have-nots, power and class struggles and the culmination of one tragic night in America’s dark history. Great anecdotes on Guthrie and Dylan.

Woody Guthrie believed the doors were held shut on the outside by “the copper boss’ thug men.”

He sings: “The copper boss’ thugs stuck their heads in the door,
One of them yelled and he screamed, “there’s a fire!”

Grown Up-Anger opens doors that were perhaps closed a long time ago by thugs and cost hardworking honest people, just trying to enjoy their families on that Christmas Eve night back in 1913.

My first introduction to Woody Guthrie came via the Hal Ashby film “Bound for Glory” with David Carradine portraying Guthrie. Who does not know his famous song “This Land is Your Land”? He was a Dust Bowl Troubadour in a Steinbeck era of Grapes of Wrath. Riding box cars, hitching rides, rolling up his sleeves and struggling with the working-class pitted against big bosses. His songwriting and poems reflected the inequality of labor unions and their “greedy” bosses. Dylan would later channel Guthrie and become one of the most influential songwriters of all time.

I enjoyed Daniel Wolff’s writing style, passion, lucidity and ability to tell us, like Guthrie and Dylan, something we need to know and why it still matters. Always remember: “This land belongs to you and me.”