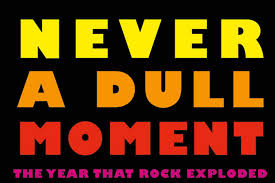 If you did, you were witness to one of the historical and monumental musical shifts in our culture when music was not just a passing fad, but a seminal soundtrack to people’s lives. Never a Dull Moment proves that the ’70s, in retrospect were one of the most important and innovative decades, at least for music (also for movies, in my opinion).

WHY I’M STUCK IN THE SEVENTIES

This book literally hit home with me. David Hepworth’s book came into my hands at the apropos time, since I happened to also be watching CNN’s excellent series on Netflix about the seventies (highly recommend). Episode 8: “What’s Going On – Music of the ’70s” is congruent with “Never a Dull Moment.”

I was a child in the seventies and had the great fortune of being raised in a house of music. Because of this, I became a musician and vocalist myself as a teenager. My brother owned 90% of the albums mentioned in this book. He had everything from Alice Cooper’s “Killer” album, Marvin Gaye “What’s Going On,” Al Green, Cat Stevens, David Bowie, J. Geils, Humble Pie… I could go on and on.

“Never a Dull Moment” was nostalgic and edifying, loaded with backstories and facts about what was going on artistically behind those great compositions. My sister had “Tapestry” by Carol King– Author David Hepworth supplied some great stories in his book about the significance of this album and how it changed the album business. When Carol King sang “You Got a Friend…” she was not referring to spurious Facebook friends today… it was honest and resonated around the world. The song spoke to people personally.

I like how Hepworth structured Never a Dull Moment in monthly chapters and the songs released for that month. He is well-researched, verifiable and passionate as a writer.

The Appendix offers “just some of the albums,” which made 1971 a groundbreaking year for music and there are many more that could have been included (Jeff Beck for example). But hey… I’ll cut him some slack.

45 years later, 2016 finds music in a fragmented, precarious and hardly profitable position. This is why you are witnessing the Rock and Roll Reunion business. Guns & Roses, Van Halen, Deep Purple, etc. the real money today is in touring. If you compare how we consume digital music presently with streaming, downloading and ripping, compared to our mass consumption of vinyl in the seventies, it is staggering. But it comes with a heavy price and that price is inferior artists, ala American Idol-style, the death of album sales and disenfranchised listeners. Sure, we might see a recent bump in Vinyl, but it will never come close to what our culture once experienced in the 70s.

Personally, I don’t think we’ll ever feel the earth move under our feet again the way it did in 1971. However, we can, with the help of David Hepworth experience a nice literary aftershock as music sleepwalks through this decade.