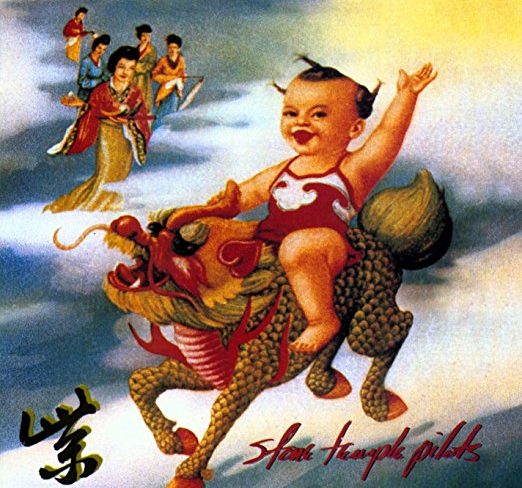 1994 was a good year for rock music and pop culture. Grunge was still going strong and the world had a fresh wave of Supergroups not seen since the ‘70s. “Superunknown” /Soundgarden, “Vitalogy”/Pearl Jam, “Jar of Flies”/Alice in Chains and this seminal album, “Purple” by Stone Temple Pilots. This was a time when people still bought CDs and albums.

Kurt Cobain died in April ’94. Purple was released in June 7th, two months later. Five days later, the world’s and media attention was focused on the O.J. Simpson Murder trial on June 12th and Bill Clinton was our president. It was the 25th Anniversary of Woodstock and Woodstock ’94 was rebooted. You could still buy gas for around a buck and see a move for $4. Pulp Fiction was all the buzz in Hollywood.

According to Scott Weiland’s bio, he liked Purple more than Core, and I have to agree with him. He felt “Purple … was more honest and biographical. It was also more heartfelt and heartsick.”

Core was a solid album and blew the doors wide open for STP, and Plush is one of the greatest rock anthems ever written. However, in Purple, STP follows Led Zeppelin’s second album trajectory. If you are conversant with Zeppelin than you know what I am talking about. Purple, like Zeppelin 2, expands and defines the group. They are no longer circumscribed by the grunge genre. To compare and contrast, you have “Still Remains,” Pretty Penny,” “Big Empty” and “Kitchenware and Candy Bars” compared to Led Zeppelins: “Ramble on,” “What is and What Should Never Be,” and “Thank You.” These songs break the two groups out of their predefined music genres and redefine them.

Dean DeLeo adds acoustic layers and atypical chords (minors and sevenths) and style choices like Jimmy Page and firmly establishes STP as songwriters and superior musicians. He serves the song and does not focus on riffing like most rock guitarists. But when Dean breaks out into leads, he has a distinctive and tasteful style like Page. Bassist Robert DeLeo wrote one of the band’s biggest hits on the album: “Interstate Love Song.” This song will never die. Still sounds fresh today. Robert DeLeo’s innovative bass-through-wah-wah pedal effect on “Vasoline,” is riveting.
Drummer Eric Kretz channels Bonham in the hit song, “Vasoline” (you hear Bongos reminiscent of Zeppelins “Whole Lotta Love” bridge section). It is noteworthy of Kretz’s detail as a drummer. He mentioned in a Drum article that he used a vintage 1929 Ludwig kit on the verses of “Big Empty” and his GMS kit on the choruses. This is another production and performance example of sonic nuances that make all the difference to the listener.

Vocally and lyrically, Scott Weiland excels on Purple. “Vasoline,” “Unglued” and “Pretty Penny” all deal with addiction and Scott was battling heroin addiction at this time. He becomes a modern day Coleridge or De Quincey. He was stuck in the “Vasoline” and could not kick it. And this habit was growing into what he once referred to as a “big black monster.” According to his biography, Scott stated that, “Only heroin could turn up the quiet. Only heroin took me to a place where shame, guilt and remorse were magically washed away.”

CAN YOU JUDGE A BOOK/ALBUM BY ITS COVER?

In the case of “Purple” yes. The intriguing design on the cover depicts a smiling baby riding the dragon. For years, I thought this was Zen-like, boy was I wrong. According to Weiland’s bio it is actually a package of China White (heroin). That aside, Purple does exude a balance of intensity and equanimity, and this energy is captured, crystallized and concretized by the gifted and incomparable Brendan O’Brien (their producer).

I don’t wish to glorify addiction by any means. However, this music and era was dangerous. It was authentic. It stood at the edge of the abyss. The great poet Charles Bukowski would advise: “Don’t try.” I’m sorry, but today’s music lacks the same street realism. Pitch perfect American Idol singers and spurious tattoo-heavies don’t convey the same reality.

PURPLE HAS STOOD THE TEST OF TIME

Label it what you will: Grunge, Alternative Rock, Hard Rock, Heavy Metal, Psychedelic Rock… 22 years later, ‘Purple’ “Still Remains” a timeless and enduring work and it has stood the test of time.