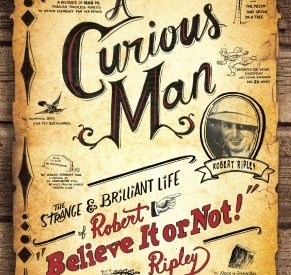 “This world is all a fleeting show,

For man’s illusion given.” – Thomas Moore

A Review of Neal Thompson’s A Curious Man – The Strange & Brilliant Life of Robert “Believe It or Not!” Ripley

I was excited about the release of Neal Thompson’s biography, and like the author wrote in his notes on sources: “I never stopped to consider the man behind it all.”

And there was a good reason for that. Unlike books on, say, Houdini.

A definitive biography simply did not exist.

Thompson’s biography is painstakingly and passionately researched. According to the author, he was given “unfettered” access to Ripley Entertainment Inc. in Orlando, and was assisted by the empire’s archivist, Edward Meyer, and VP, Norm Deska, to complete the intriguing life of an extraordinary personality. This included journals, home movies, letters, photographs and essentially the Ripley jackpot of information. He also invested many hours in research at University of North Carolina (Wilson Library), which is home to thousands of documents on Ripley.

Norbert Pearlroth, an intelligent man Robert Ripley hired as an assistant, translator and invaluable resource– a proverbial “fountain of knowledge” –said it best about why we’re drawn to Ripley’s world. He stated, “Our daily life is so cut and dried that we get relief from fairy tales… except his (Ripley’s) fairy tales are true, and this excites people.”

If one stops to think about how a cartoonist interprets his world, it’s a unique perspective and perception. This makes sense why Ripley was drawn to the caricatures of life and all of our world’s oddities. BION – The question itself got us thinking and educated and entertained us.

His first cartoon was sold to LIFE magazine at 18 years of age for $8, and it was this talent alone that would catch the eye, and land a lucrative contract with William Randolph Hearst (at that time one in four Americans read a Hearst newspaper). What’s astounding is Ripley went on to make millions at one of the worst periods in US History: The Great Depression. This is similar to the success story of cartoonist Will Eisner who was rich by age 22. These men paved the way.

Thompson’s writing style is congenial and cohesive. A stickler for details.  We learn of Ripley’s world travels, his rebellious spirit and relationships, and reading this book made me appreciate him all the more.

A note on design: I love the tactile feel of this book and design by Jaclyn Reyes and Three Rivers Press. This is one you can’t “feel” on a digital reader… you need a hard copy.

If you were to ask me, “what’s the strangest thing I know,” I would say: The great writer Tennessee Williams choked to death on a plastic cap from a nasal spray bottle.

Believe it or Not!

“I received this book for free from Blogging for Books for this review.”