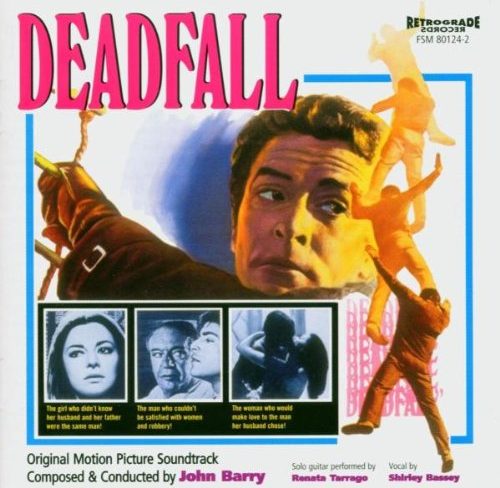 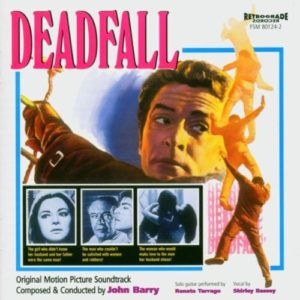 John Barry is hands down my favorite film composer of all time. I was singing “Born Free” at age three and fell in love with “Diamonds Are Forever” as a teenager, and I haven’t stopped listening to him since.

“Deadfall” is an excellent example ‎of Barry’s brilliance. The soundtrack is tantamount to the film. The compositions are reminiscent of his great body of work on the James Bond films and “Deadfall” could easily be mistaken for a Bond soundtrack, especially with the incomparable Shirley Bassey belting out the first track “My Love Has Two Faces.” What a gifted voice!

I bought the CD mainly for “Romance for Guitar and Orchestra,” but was thrilled with the entire production and every magnificent track. Renata Tarrago’s solo guitar channels the famous work Concierto de Aranjuez”. I am a classical guitarist so this song was an amazing discovery.

I want to compliment Lukas Kendall, the editor/publisher of Film Score Monthly (FSM) and his persistent and consistent quality production and work on these soundtrack gems. I have purchased many CDs from his company that are rare, some of which include: “Omega Man,” and “Marathon Man.” “Deadfall” and FSM is a must for movie score aficionados.

A Note on Liner Notes:

Outstanding!!! Accolades and praise to Jon Burlingame and Lucas Kendall. I can’t tell you how many times I have purchased a CD and there are no liner notes. Nothing. “‎Deadfall” is loaded with edifying and interesting liner notes and production anecdotes. This is a chance to learn more from the director, Bryan Forbes, about the production and behind the scenes. Great journalism.

John Barry’s music is seductive, soothing and exhilarating. I never tire of his compositions and Barry, besides Sean Connery, is why I often return to the original Bond films. There is no Bond without the genius of John Barry.